Things to do in Surabaya that must be visited at night

What Things To Do in Surabaya?  Surabaya city is the 2nd largest city in Indonesia (after Jakarta) and is located in East Java province on the island of Java. It is the capital of East Java province with a population of more than three million and a further seven million in the surrounding rural area.

The diverse population is principally Javanese and Madurese with significant minorities of Balinese, Sunda, Batak, Minangkabau, Banjar, and Bugis peoples as well as many foreigners. The city is situated on the northern shore of eastern Java at the head of the River Mas and along the side of the Madura Strait.

Based on history, the city was founded in 1293 when Raden Widjaja established Majapahit, Indonesia’s most glorious empire. Surabaya has grown into an elegant city of large, colonnaded buildings bordering broad, tree-shaded avenues, it serves as the commercial center of a thriving industrial and agricultural hinterland. Surabaya offers many good hotels, shopping centers and plentiful sources of entertainment tourist destinations, and many things to do in Surabaya. 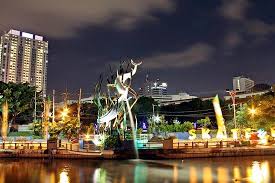 Think to do in Surabaya Worth Visiting

Most visitors travel to Surabaya for sightseeing, business, shopping, or just a stopover to get to Yogyakarta, Bali, or Sulawesi, etc. Surabaya has destination attractions and modern shopping centers that fit in with everything in Southeast Asia and the characteristics of bustling Asian cities.

Today it is one of the largest cities in the Southeast Asian region and is the main commercial center. As a tropical region, The best time to visit Surabaya city has a dry season from May through to September because of a wet season from November through April throughout the year with Surabaya temperatures ranging from 26°C to 31°C.

Surabaya Shopping (What to buy in Surabaya)

Surabaya has some of the largest shopping malls in South East Asia as well as factory outlets and distros. Surabaya hosts some of the largest and most modern shopping malls in Indonesia incorporating hundreds of retail operations ranging from local to international retailers and service providers. Tunjungan Plaza, at the heart of the center of the city and part of the Tunjungan City superblock development, is perhaps the most popular in visitor numbers but other malls such as Galaxy Mall, on the east side of the city, Surabaya Plaza and Surabaya Town Square are all equally modern malls with their own attractions. In Surabaya must buy local special handicrafts such as batik, that can be found at outlets malls or plaza traditional markets.

The best day trips from Surabaya

Reviews of the conditions of the animals at this zoo and the environments in which they somehow survive make for some hard reading. Located 3 km south of the city centre. One of the largest and best in South-East Asia. You also can see the Suroboyo monument near the zoo entrance.

Located some 3-4 hours drive from Surabaya. Mount Bromo is an active volcano which forms part of the Bromo Tengger Semeru National Park covering 800 square kilometres. At 2,329 meters it is by no means the highest peak but it is the most famous.

The colonial-era residence of the Governor of East Java. You can watch Reog dance, a vigorous traditional dance at the nearby ‘Balai Pemuda’ (Youth Hall- one historical building in Surabaya) every Sunday at 8.30AM.

There are many food stalls and bazaars at night where you can find a lot of good food. It gets very crowded at night and it’s a place for a lot of young people to hang out. A new food market just opened in 2011 and close to G-Walk you’ll also find some bars. G-Walk is located between Pakuwon Super Mall and Ciputra Golf.

Situated in Surabaya city center‚ this stately Dutch colonial-style compound was built in 1862 and is now a preserved historical site. Cited as the top tourist destination in Surabaya, the complex offers a museum, an art gallery, a cafe as well as souvenir shops. It also provides a Surabaya City Sightseeing bus for free with a tour guide speaking English. Check out the timing for the museum’s main attraction: hundreds of girls hand-rolling Indonesia’s most prestigious cigarette, Dji Sam Soe, using traditional equipment. They do it at an unbelievable speed.

located in west Surabaya (Graha Family). There are many food stalls and bazaars at night where you can find a lot of good food. It gets very crowded at night and it’s a place for a lot of young people to hang out.

A huge mosque (some say it’s the biggest mosque in SE Asia). The mosque has a tower which is equipped with an elevator, so that visitors can see Surabaya from top of the tower, 65 m (195 ft) above ground level.

A mosque with beautiful Chinese architecture. It is about 10 min walk from Surabaya City Hall, or 5 min by “becak”.

A monument on Surabaya’s seafront dedicated to the service of The Indonesian Navy.

A Soviet-built submarine display which proudly served in Indonesian Navy since 1962. Launched in 1952 and since her decommisioning in 1990, now preserved as a monument. The body/hull was slightly cut for stairs & door for easier public entrance & viewing. Right beside the monument, there is a building where a short movie about the history of the submarine itself can be viewed. It is located beside the river next to Delta Plaza. You also can see the Suroboyo monument near the river.

A large Arab market selling carpets and all sorts of other goodies. At the end of the main narrow lane is the mosque and grave of one of the nine Muslim saints of Java, Sunan Ampel.

also known as the Surabaya-Madura Bridge, is a bridge with cable-stayed which connects Surabaya on the island of Java and the town of Bangkalan on the island of Madura. The bridge is open for public since June 10, 2009.

A monument dedicated to the fallen heroes of Surabaya during the Independence war of 1945-49. It is located right in front of the Governor’s official building.

Enjoy an art center in the heart of Surabaya, . You can watch the Reog Dance and other art performance. The big event is Festival Seni Surabaya (FSS), held every year on June. During the Dutch Colonial era, this building was a club called Simpangsche Societeit.

Get around the Old Town area (Around Kembang Jepun to the port) and enjoy the view of nice colonial buildings.

How to get Surabaya

See options for getting Surabaya by bus

The main bus terminal Surabaya is Purabaya bus terminal at Bungurasih, some 10 km south of the Surabaya city. From there, buses depart from and arrive at minor and major parts of east Java and major cities throughout Java. There are shuttle buses to local destinations and economy and air-conditioned buses to other destinations. Bali (Denpasar) to Surabaya the journey time 10 – 12 hours. including the ferry between Banyuwangi and Gilimanuk. Jakarta to Surabaya with a journey time of 13 – 14 hours but so much & will depend on the traffic so your journey could extend by another 5 hours if conditions are bad. The train or plane is a better option.

See options for getting Surabaya by mini bus, van

there are now an increasing number of companies running door-to-door or office-to-office minibus services from and to major cities in Java.

See options for getting Surabaya by Train

The city has has two main stations, Surabaya Pasar Turi and Surabaya Gubeng. Availables classes: Executive (EKS) Business (BIS) and Ecomony (EKO).Seats in EKS and BIS for intercity journeys can be reserved in advance.

Pasar Turi Station If you take a train from Jakarta’s Gambir Station note that trains using the northern main line will take at least 10 hours to arrive at Pasar Turi.

The Argo Bromo Anggrek, Sembrani and Gumarang trains use the northern line, while the Bima uses the southern line.

The Argo Wilis travels to Bandung during the day.

The Sancaka travels to Yogyakarta via Solo twice a day – journey time about 6 hours.

The Mutiara express runs to Banyuwangi twice a day for connection with the ferry to Bali.

See some options for getting Surabaya by Air

Travel to and from Surabaya by domestic flight is available from many cities in Indonesia including Jakarta, Bandung, Denpasar (Bali), Yogyakarta and Medan dll.

See some options for getting Surabaya by Boat

Tanjung Perak is the name of the port in Surabaya.

There are popular Pelni connections to Sulawesi (Makassar) and Kalimantan (Pontianak).

You need the best travel services around Surabaya for sightseeing, shopping, or just a shuttle service from the International Airport, train station, hotel, etc. Please contact us surabayabromotour.com who is ready to help you what to do in Surabaya.

Where to stay in Surabaya

Where to stay in Surabaya for every budget, we will show you how to enjoy the city according to your means. As well as 4 and 5-star hotels there are also many guest houses and mid-range hotels to suit everyone. Excellent value in quality and comfort is easy to find. Check this out to rent: hotels, guesthouses, and apartments.

There are hundreds of Surabaya hotels for every budget from no stars to 5 star. Here is a selection for when you travel to Surabaya.

A great option for a budget stays if when you travel to Surabaya on a budget. A 10-minute drive from Gubeng Station.

All Rooms have air conditioning with minibar, telephone, and TV.

Near Heroic Monument. Restaurant, bar and health club with spa.

Popular with business and leisure travelers, the hotel is situated in Mayjen Sungkono

All rooms have mini bar, TV and air conditioning.

Situated in the city center amid the shopping centers and entertainment facilities. Just 45 mins from the international airport.

Sahid Hotel Surabaya is situated in central Surabaya, close to the Submarine Monument and the World Trade Centre.

The hotel was built in 1910 and offers an oasis of peace and tranquility in the midst of snarling traffic. Colonial style rooms, outdoor pool, spa and all the other accessories that you would expect from a 5-star hotel.

There are a huge number of Surabaya guest houses available for the visitor. Its impossible to list them all so here is a selection and we’ll continue to update.

Rooms are air conditioned with TV and fridge.

Renting an apartment gives more privacy than you will find in a hotel and, if you plan to stay a few days in Surabaya, you may find it cheaper too. Increasingly hotels are offering serviced apartments within their complexes.

One, two and three-bedroom serviced apartments situated in the town of Darmo. Long and short term rental.

One, two and three-bedroom designs. Part of the hotel complex

This apartment block has unfurnished apartments for rent.

The Square is a new exclusive hotel with the concept of ‘one stop living’ in a comfortable and quiet environment. 2 room types – Deluxe single and Deluxe double.